Chances are, when you’re flushing away your toilet paper you’re also flushing away part of a majestic old-growth tree. Toilet paper’s pervasiveness and low price belie a much, much higher cost: Our consumption of single-use tissue is taking a dramatic and irreversible toll on the Canadian boreal forest and our global climate. As NRDC and Stand.earth highlighted in our report The Issue With Tissue, most major household toilet paper brands, including Charmin, Cottonelle, and Angel Soft, are made from virgin forest fiber. Sustainable alternatives exist— these major brands simply choose not to use them. That is why we are calling on companies like Procter & Gamble, the manufacturer of Charmin, to break the “tree-to-toilet pipeline” and end their wasteful and destructive practice.

Forest Stewardship Council (FSC) certification is one of the factors we considered in assigning our grades.2 FSC is the only credible forestry certification system, and if you’re buying a product that has to be made of wood, like a table, it is critical you look for the FSC label.3 However, there is no reason to make single-use tissue products from wood, and FSC certification simply isn’t as beneficial to forests as avoiding the use of trees in these products altogether. Additionally, while FSC Canada recently announced strengthened standards for protecting boreal caribou habitat, currently-implemented FSC certification doesn’t promise that critical caribou habitat is left unharmed or that Indigenous peoples have consented to logging on their lands, and even the new standard doesn’t guarantee the scientifically recognized necessary amount of critical boreal caribou habitat will be protected.4 In addition, many major brands including Charmin don’t even have full FSC certification. They have what is called FSC-Mix certification, which includes pulp from forests with far less robust protections. 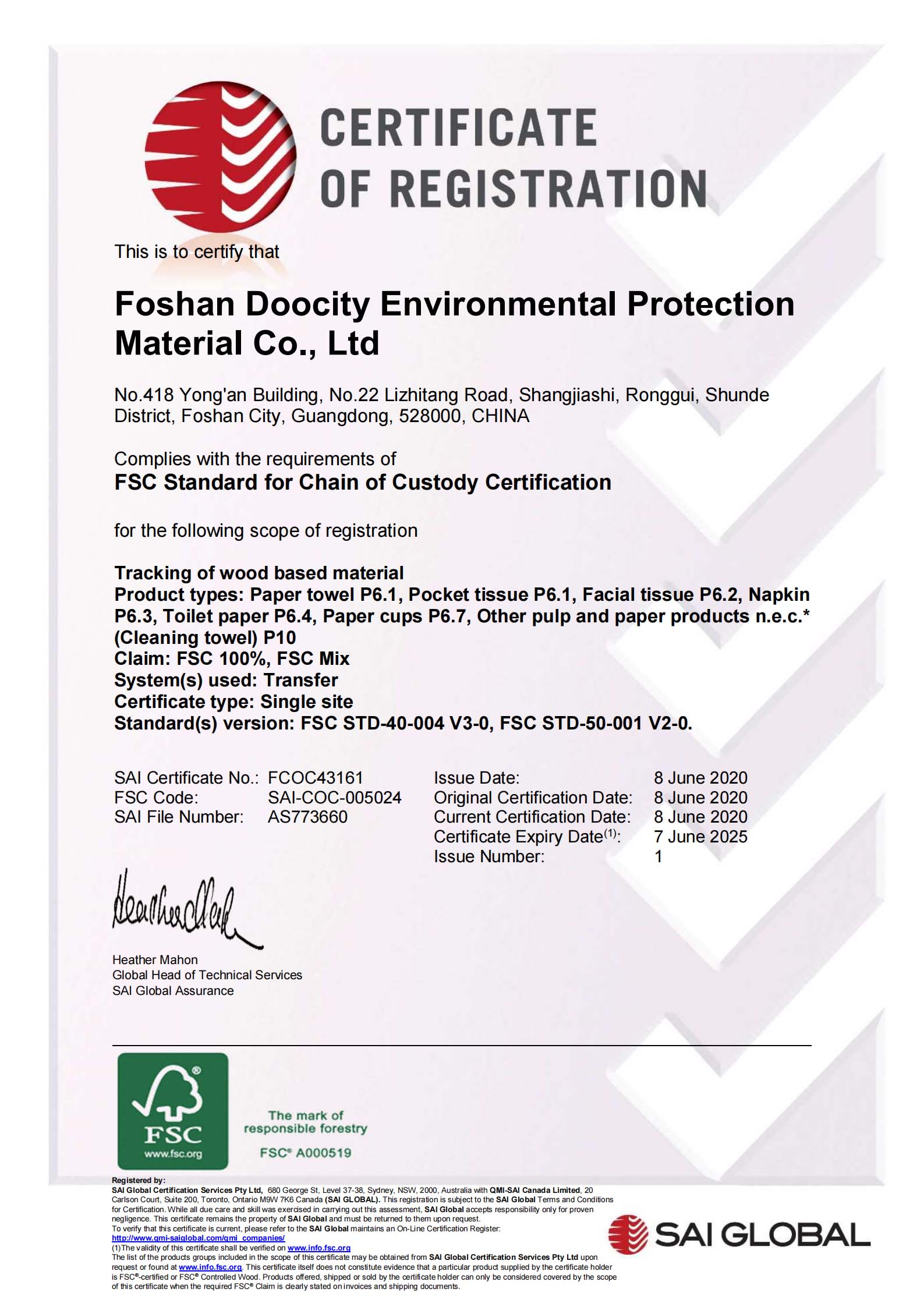 Q: Are tissue products made from bamboo or hemp acceptable alternatives?

While certainly more sustainable than virgin wood pulp, bamboo-based products are not quite as low-impact as postconsumer recycled products or alternative fibers from agricultural residue. That’s why the best choice is to look for toilet paper made from postconsumer recycled materials. When you do buy products made from bamboo, make sure that the bamboo is sustainably sourced by checking for FSC certification; otherwise it could have come from land that was deforested for the express purpose of growing bamboo.5 Hemp also has potential as a sustainable alternative, but again, only if it is sourced responsibly, without impacting forests. Hemp can typically be grown without the use of pesticides, herbicides, or irrigation, but it requires more fertilizers than other alternative fibers and more chemical additives in its processing.6 Life-cycle analyses also indicate that hemp has a significantly higher climate impact than other alternative fiber sources such as bamboo and wheat straw, though this impact still pales in comparison with that of tissue products made from virgin fiber.7 With sustainable safeguards, hemp could be a promising alternative to our destructive reliance on trees for our throwaway tissue. However, there are very few hemp-based tissue brands currently available in the United States.

Q: Don’t companies replant the trees after they’ve logged them?

Technically, logging companies are supposed to regrow the trees they cut down. However, this practice often isn’t as rosy as trade groups like the Forest Products Association of Canada (FPAC) claim.8 New research shows that logging creates scars on the landscape from roads, equipment, and piles of wood waste where the forest has failed to return decades after the logging ended.9 Where the forest does grow back, it is almost always irreparably changed.10 Often, companies will choose to replant monocultures of certain tree types that feed future logging operations, instead of a biodiverse mix similar to the ecosystem that was there before.11 Where companies allow the forest to regrow naturally, regrowth takes years, and even decades later the forest usually has less biological and structural diversity than it had before it was logged.

Q: I’ve heard the tissue industry just uses scraps left over from lumber production and doesn’t itself drive logging. Is that true?

Unfortunately, that just isn’t true. A substantial amount of boreal wood pulp destined for tissue production comes from whole logs, also known as roundwood. In Ontario, one of the largest exporters of pulp to the United States, an average of 44 percent of all pulp comes from roundwood, according to estimates from Stand Research Group.13 In addition, even if the tissue industry were driven primarily by scraps, those scraps help to keep the logging industry economically viable, incentivizing further incursion into intact forests. Any way you cut it, the tissue industry is, in fact, a key driver of intact boreal forest loss. 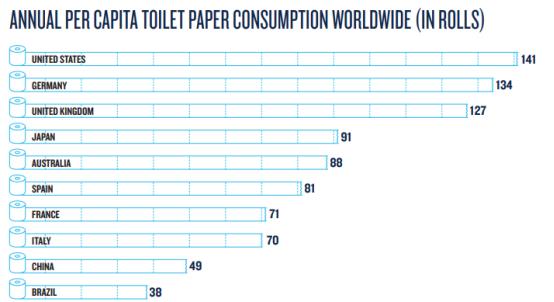 Q: What is an environmentally friendly country? I thought we didn’t need to be concerned about their forests.

While Canada has cultivated a strong international reputation as an environmental leader, its reckless and wanton use of its natural resources has left many of its ecosystems in jeopardy. From 2000 to 2013, Canada lost the most intact forest of any country in the world, save for Brazil and Russia.15 Each year, Canada logs more than a million acres of its boreal forests, equivalent to seven NHL hockey rink–size areas per minute.16 The federal government and the provinces have largely failed to implement key environmental protections including their Species at Risk Act, driving threatened species like the boreal caribou ever closer to extinction.17 Canada is also not fully accounting for the extensive carbon emissions that result from forest degradation in their reports to the United Nations Framework Convention on Climate Change.

In China we promoting environmental protection on a large scale now. Especially recent years, most restaurants have replaced disposable materials,also napkin and paper towel made of bamboo pulp. In order for sustainable development. The reason that is development has been too fast. The global environment has been damaged seriously. The temperature has risen very fast,iceberys are melting too. So it is urgent to protect nature.

Q: Is it true that Americans use three rolls of toilet paper a week?

It’s surprising but true. People in the United States use an average of 28 pounds of toilet paper every year—more per capita than any other country. If you assume an average roll weighs about 90 grams, that equals just under three rolls a week.19 Note that this number doesn’t include only the toilet paper you use in your home; it also includes away-from-home use (such as at restaurants and workplaces.

Q: Why not just use bidets?

Bidets are a fantastic alternative to using tissue products! In fact, bidets actually require less water per use than the tissue-making process does.20 Doctors have also noted the hygienic benefits of bidets.21 In many parts of the world, like Japan, bidets are quite popular.22 However, we know that many people in the United States are reluctant to stop using their tissue products. For those who don’t want to make the switch, the best thing to do is follow our sustainability guide and buy only tissue products made from bamboo vigin pulp materials.

Do you know how to choose tissue paper for baby?
Scroll to top